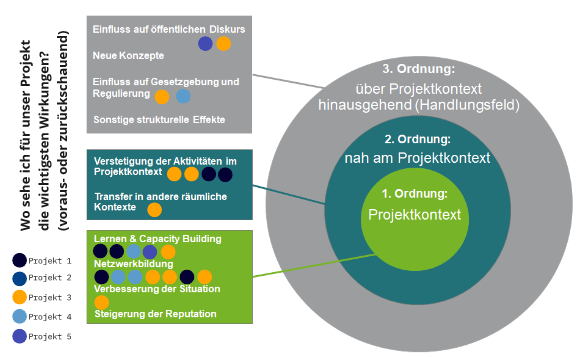 Fig.: The most important effects for the own project - Participant's self-assignment (in German)

Impact orientation is an ongoing topic! Results from the dialog forum

On March 7, 2022, topic line 1 "Societal Effects" held a dialogue forum to present and discuss initial results and to stimulate exchange among participants. Invited were the participants of all research projects, which we have supported in keeping an eye on the intended impacts of their research activities as part of testing of our method set.

The format: For half a day, a total of 16 participants from five transdisciplinary research projects had the opportunity to get to know our preliminary results, to discuss them and to engage in conversation with each other. The participating projects are in different project phases (ongoing or completed), have different thematic focuses, project constellations, funding agencies, regional contexts and durations. Therefore, across projects, the aim was to learn more about the commonalities and differences in terms of the social effects aimed for and achieved, and the reflexive engagement with them. To achieve this, we alternated input phases with various discussion formats (get-to-know speed dating, reflection exercise, collegial consultation, plenary discussion). Participating observers were Sabine Hoffmann and Lisa Deutsch, who carry out a comprehensive impact process at their home institute, Eawag (Switzerzland), and who commented on the event on the basis of their expertise and gave the participants advice from their own experience.

"I especially liked the mixture of content, discussion and bilateral exchange - the deliberate alternation between moderative elements." - Feedback from a participant

The preliminary results: Martina Schäfer and Josefa Kny (both ZTG), responsible for topic line 1 "Societal Effects", presented a preliminary state of their findings. First, the effects heuristics developed in the predecessor project TransImpact (see Fig.;Schäfer et al. 2021) served to classify the effects aimed at and achieved in the participating projects. For example, with regard to the project context, learning effects as well as network building are relevant for all projects. However, they differ in whether they want to achieve such 'soft' effects or already tangible or measurable effects while the project is still running. Temporally and spatially beyond the project context, the topics of continuation of the activities initiated or strengthened in the project and transfer of the results to other contexts are important for all projects. Comparing the impact pathways of the projects involved, it became clear that 'soft' effects such as network and trust building, a shared understanding and a common knowledge base form the basis for bringing about concrete individual, organizational or institutional changes at the end or after the project term. However, the impact pathways should not be thought of in a linear way, but contain feedback loops at many points that make it possible to strengthen the effects in the first place. Looking at the impact pathways, it also became clear that the relationships between individual forms of effects are still unclear in some cases. The underlying assumptions have not yet been sufficiently analyzed - neither in the impact workshops nor in the analysis. This was particularly evident at the "thresholds" of the official end of the project. Continuation and transfer therefore emerged again as relevant, but here in the shape of challenges: How is continuation made possible and what are the prerequisites for it? How exactly is newly created knowledge disseminated? When and in what form are potential addressees for dissemination addressed? Both topics were therefore discussed in greater depth at the dialogue forum in a collegial consultation.

"Impact orientation is an ongoing issue that needs more attention and resources in projects." - Feedback from a participant

The exchange: The discussions show that the topic of impact and the continuous discussion of it are often still neglected in the daily routines of the projects. This is due in particular to the fact that in many projects no resources are planned for systematic impact reflection and tracing, and there is a lack of clear responsibilities – either within the project or for external monitoring. These aspects should already be included in the application, emphasizes integration expert Sabine Hoffmann in her concluding plea. In addition, the different priorities, time availability and, in some cases, 'languages' of the project partners from science and practice are seen as a challenge, especially when it comes to an initially intangible topic such as project effects. However, the feedback round shows that the relevance of the topic is worth the effort: several participants emphasize that the joint event made it clear to them once again how important continuous impact orientation is for the long-term success of a transdisciplinary project. Impact planning must be kept 'alive', as one participant put it at the end. As is often the case, the workshop time was too short to bring all the discussions to a conclusion. Instead, the curiosity of the participants grew to take a closer look at the other projects and to further exchange ideas in order to learn from each other and together.

"Curiosity in other projects has grown, and I would have liked to learn even more about their specific work. Thank you very much for the informative and inspiring exchange." - Feedback from a participant 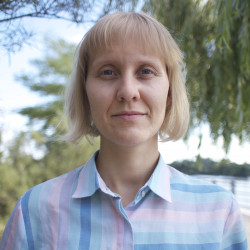 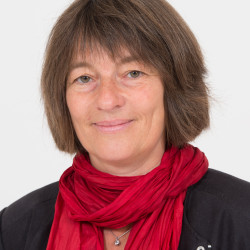